When your household routine’s disrupted, whether it’s because you’re moving house, there’s a must-see match on the telly or you just don’t feel like cooking, it’s handy to have convenience food to fall back on. If you’re in almost any city in the Western world, pizza is almost always one of the easiest options – all the more so as you can have it delivered. Indeed, in recent years delivery pizza’s become a firm favourite in many developing countries too.

Pizzas have been around for a lot longer than might be thought. Some claim that they’re even mentioned in Virgil’s Aeneid, recounting the mythological events leading up to the foundation of Rome – at one point the heroes eat the “plates” off which they’ve been feeding. That would put pizza’s invention earlier than the eighth century BCE. 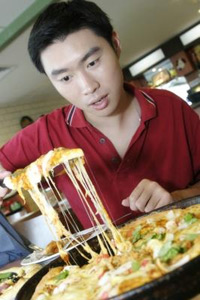 There’s some evidence of pizzeria-like kitchens in the ruins of Pompeii. But of course the tomato (an import from the New World) and the water buffalo (from India) weren’t available in those days. By the 18th century, though, something resembling the modern pizza was being prepared and sold in the back streets of Naples. Alexandre Dumas described it in his work Le Corricolo as the cheap winter food of the city in 1835, flavoured with tomatoes, lard, tallow, anchovies, oil or cheese. In 1889, though, pizza baker Raffaele Esposito of Naples baked three different pizzas to mark the visit of King Umberto I of Italy and his Queen, Margherita. The Queen’s favourite was one with the three colours of the flag of Italy – green (basil), white (mozzarella) and red (tomato) – and the pizza Margherita was born.

Nowadays, pizza’s largely associated with US fast food culture, and you might think that it had been around in the States for years. But although the first US pizzerias were founded in the very early 20th century, pizza didn’t really take off there until after the Second World War, when GIs returning from Italy popularised it. Pizza Hut was founded in 1958, Domino’s Pizza – the pioneers of delivery pizza – in 1960. Today they’ve got operations in over 100 and over 50 countries respectively.

There’s still plenty of room for more traditional pizzerias, though. The best of them can serve up a wonderful meal that won’t break the bank but still leave you with a smile on your face after you’ve eaten it. We had a meal like this in Siem Reap in Cambodia recently – although the smile was partly because of the bizarre ingredients! (You can read about it here: Pissa Italiana)

Talking of bizarre ingredients, it’s interesting to see what combinations are on offer around the world. In Thailand they seem to be fond of things like, erm, squid. Strangely, the Hawaiian pizza – ham and pineapple – isn’t popular in Hawaii.

With the increasing interest in protecting intellectual property and guarantees of origin (champagne being the most famous example), I suppose it was only a matter of time before pizza makers got involved. The Associazione verace pizza napoletana (Association for the genuine Neapolitan pizza) sets out an elaborate process and closely-defined recipe which it wants pizzas to conform to if they’re to be marketed as genuine Neapolitan pizzas. However, they only allow three variants – the Margherita (tomato, basil, mozzarella and oil), the Margherita Extra (same as the Margherita but using mozzarella from Campania) and the Marinara (tomato, garlic, oregano and oil). Somehow I can’t see people giving up all the other toppings…