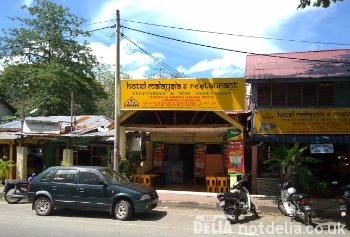 We were stranded in Kuah one Sunday afternoon when everything (apart from the Langkawi Parade shopping mall) appeared to be closed. Fancying a beer, we came out of the mall and saw a few restaurants across the dual carriageway from the main entrance.

In particular, there was a South & North Indian restaurant (called the “Hotel Malaysia”, but there was no sign that there were any rooms attached) that was displaying Tiger beer adverts. It appeared to be closed, but we asked in the halal restaurant next door (on the right-hand side, as you face the restaurant from the front) and someone came along, opened up the Indian restaurant and served us the beers we were after. So everyone was happy!