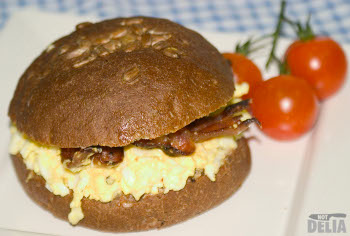 This is a meal in just a few minutes, for very little effort, so if you’re in a hurry or simply can’t be bothered to cook try this idea for a quick and filling snack. It’s even easier if you omit the bacon (vegetarian version) but not half as tasty.

You need a bun or a roll of some sort, preferably brown, a couple of hard boiled eggs, mayonnaise, and a few rashers of streaky bacon.

How to boil an egg

Now we come to the difficult bit – boil your eggs. Apparently this is a complex procedure but, never fear, Delia Smith has a whole treatise on the subject. She suggests that a hard boiled egg takes 7 minutes. Hmm, I feel sure I remember learning 12 minutes at catering college. Delia also says never to boil an egg straight from the fridge. Plus she puts the egg into simmering water. Right. Erk. In that case I don’t know how to boil an egg. I’d better see what other people have to say on the subject.

In How To Cook Absolutely Everything (page 102) Anne Willan says:

You’d think boiling eggs would be easy but there are snares. Very fresh eggs take a minute or two longer to cook, as do extra large ones. Shells crack easily during cooking, particularly those from battery hens, so start cooking in cold water so the egg heats up slowly and time from the moment the water comes to the boil, 3-4 minutes for a soft boiled egg, 5-7 minutes for the mollet [the yolk is soft but not runny – can’t say I’d heard of that term before] and 10-12 minutes for hard boiled. Boiling is a misnomer as eggs should be simmered both to keep the shells intact and so as not to toughen the whites…

Darina Allen also tells us how to boil an egg in the Ballymaloe Cookery Course (page 115).

Far be it for me to sound too dramatic but there’s absolutely no point in serving a boiled or poached egg unless you can get really fresh organic free range eggs!

And then, after all that drama, goes on to tell us how to make soft boiled eggs (pretty much the same way as Delia Smith) and oeufs mollet – but never mentions hard boiled eggs. Ho hum. For anyone who’s interested, on the subject of oeufs mollet, she says they are “served often on a crouton with a complimentary sauce spooned over the top”. I don’t quite know what she means by “complimentary” in this context. Most likely she means “complementary”.

The Daily Mail (I’m not a fan, by the way, I just happened to come across this in the course of researching this article. Honestly!) has also delved into this subject. Unlike me with my limited resources, they were able to interview some big names such as Michel Roux, Jean-Christophe Novelli, Anton Edelman, et al about this vexing and complicated culinary procedure.

Daily Mail: So, how do you boil an egg?

I’d not realised that there are so many different ways to boil an egg. Aye, you learn something new every day.

I just take mine out of the fridge, bung ’em in a pan of cold water, bring to a simmer and, once they reach simmering point, time for 12 minutes, remove egg from the hot water and put into cold water (otherwise the egg will continue to cook from the residual heat). It’s that simple! And it’s worked for me every time.

OK, so we now have our hard boiled eggs. Meanwhile you’ll have fried (or grilled, if you prefer) your bacon.

Next make the egg mayo. The easiest way is to rub the eggs through a grater. Put that into a bowl, add a couple of dollops of mayo, season with salt and pepper according to taste, and mix it all up nicely in the bowl.

Now it’s just an assembly job. Spread the roll with butter or mayo, add the egg mayo, add the bacon. Eat. It doesn’t get much easier than that. There’s no need to make a meal out of boiling an egg. (Groan)

12 Responses to “Egg Mayo and Bacon in a Bun”