Wandering around Kuala Lumpur looking for somewhere to have a drink can be a slightly trying experience, at least if you’re more used to the relatively generous supply of bars in cities elsewhere in South East Asia. But it’s not all bad news. Most of the hotels have bars attached, some of them really very comfortable. So it was that, early one Friday evening, fresh off the ‘plane and strolling around Bukit Bintang, we came across Delaney’s on the lower ground floor of the venerable Federal Hotel, built just in time for Merdeka (independence) in 1957.

OK, so to a certain extent Delaney’s is typical of the sort of Oirish pub you can find anywhere in the world. (You can certainly find them in Bangkok – there’s a Delaney’s there too.) But it’s a pretty good bar in its own right, with comfortable chairs, a selection of magazines to read, a big-screen TV for whenever there’s a major sporting event on (we saw several dozen stools stacked around one of the walls, so it must get pretty busy when there’s a big match on!) and very friendly and helpful staff who are happy to engage in a bit of banter with the customers.

As luck would have it, we arrived during Happy Hour, and the Guinness was flowing. Guinness (and stout generally) is relatively cheap in Malaysia – or is it that lager’s relatively expensive? Whatever, we settled down to pouring a few ebony mind-changers down our throats.

But when the beer arrived, it came in the company of an extra waitress with a basket full of tickets. Both of us were invited to draw one each to see what we’d won in the special prize draw Delaney’s were holding that evening. We won a pack of playing-cards (very handy, as we’d forgotten to bring any on this particular break) and a lighter (mine was running fairly low), so we were feeling pretty pleased. To our mild surprise, when we’d finished our first pints and ordered the next we were invited to draw again. Another pack of playing cards, but this time we also got the star prize: a set of three Guinness whisky tumblers in frosted glass, with the Chinese characters for “Bravery”, “Health” and “Prosperity” marked on them. Nice!

Encouraged by our experience of the Friday night, we went in again on the Saturday. (No draw this time; sadly, we were told that it was on the Thursday and Friday only. Oh well, we’d already done pretty well out of it, and there are only so many games of cards that require multiple packs. Some more glasses might have been nice, though…) We were feeling pretty hungry, so we decided to see what was on offer on the menu. 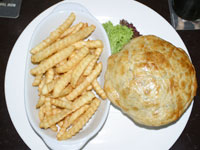 We ordered one fish and chips, and one steak and Guinness pie with chips. (It’s always worth hedging your bets – if one of the meals is lovely but the other one’s mediocre, then at least we can share the good meal.)

The steak and Guinness pie was a good deal better than expected. In particular, the pastry wasn’t yer bog-standard industrial pastry – it appeared to be made on site, which was nice. Lovely tasty gravy contained a good supply of mushroom and onions. The beef was not bad either; a bit dry, but there was nothing boingy about it. 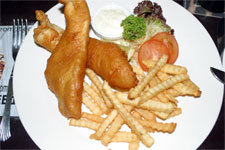 The fish was pretty good too, with an excellent light, crisp batter. The tartare sauce wasn’t really tartare sauce, more like flavoured mayonnaise, but it was pretty tasty all the same. The chips were the standard frozen crinkly things you seem to get everywhere these days – not very exciting, but at least they were hot and edible.

Our rating: 4 out of 5
The food was good, as was the beer, but it was the staff that really made the place. In fact, they were so helpful that they’d come round to warn us before Happy Hour finished at eight o’clock.