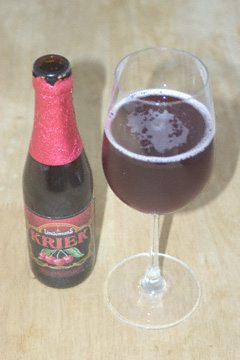 If you were conducting a survey asking people to name a distinctively Belgian type of beer, then kriek would be high on the list of responses.

You couldn’t get much more Belgian than kriek. For a start, it’s traditionally made with a particular rare variety of morello cherry (the word kriek itself is the Dutch and Flemish word for a morello cherry) grown only around the Brussels area – Schaarbeekse krieken. But not only that, it’s based on lambic, the beer fermented by the action of a wild airborne yeast that, again, is believed to be native to Brussels and its hinterland. (Lambic has a distinctive sour, tart taste, as does the morello cherry, so you’ve got a double dose of sourness there.)

The whole process of brewing takes well over a year; the cherries are added whole to the lambic after about six months, and then the peels and stones are removed after a further 8-12 months. A small dash of juice may then be added to give a second refermentation in the bottle. (Because of this, the bottles need to be able to withstand internal pressure – typically, Champagne bottles are used.)

I’ve just been drinking a bottle of Lindemans Kriek. It’s not a traditional kriek; very few are, as the original Schaarbeek cherries are so rare. But Lindemans developed a method using cherry juice from fresh cherries, which makes it rather sweeter and fruitier than the original version. They also use a blend of lambics that’s an average of at least a year old and of which the oldest has been left to mature for at least three years in wooden barrels.

It’s a very refreshing drink, even if it’s not entirely traditional. It’s still got a powerful kick of acid as well as the strong fresh cherry flavour. And it’s a relatively weak beer by Belgian standards, with an ABV of just 3.5%. Just right for those summer afternoons when you fancy a bit of a thirst-quencher – served at about 5°C – although Lindemans themselves reckon it goes best with fromage frais sandwiches, rabbit, or by itself as an aperitif.