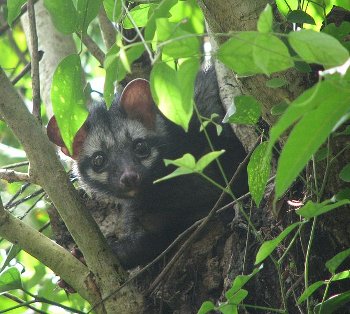 There’s been an awful lot of media interest recently in kopi luwak – also known as civet coffee, named after a relative of the mongoose called the palm civet.

For those of you who haven’t heard of it, kopi luwak originates in Indonesia (the name is simply the Bahasa for “civet coffee”) and is produced from beans that have – there’s no nice way of saying this – been through a civet’s digestive system. Although civets are primarily carnivores, they are also very fond of coffee berries and eat them whole. The fleshy outside of the berry gets fully digested, while the beans come out the other end. (The Daily Telegraph has an interesting picture gallery all about it.)

The theory is that the beans get fermented in the civet’s digestive system, in the process losing many of the substances that give coffee its bitterness, and that the resulting coffee is a smoother, tastier and all-round better drink.

Some people suggest that there’s an extra dimension to this. While it’s becoming increasingly popular among producers to keep civets in captivity and feed them berries, civets in the wild are allowed to pick and choose their own berries, taking the juiciest ones and thus producing a better class of bean than the captive civets, who have to take what they’re given.

Kopi luwak has been produced in Indonesia for some time, although only in very small amounts. But Vietnam and the Philippines (where it’s known as kape alamid) have picked up on the idea too, and more recently the Thais have got in on the act. Given the prices that it commands – a single cup will set you back up to £50 in the UK – this isn’t surprising, although the increased production may well end up bringing the price down.

Even so, the story’s hardly new – the BBC has been running it for at least seven years now. And a quick search on the web doesn’t reveal anything really exciting in the world of civet faecal matter to merit the sudden recent flurry of media interest.

It’s as if some newspaper was having a really slow news day and someone’s suggested trotting out “that civet coffee thing” as one of the tried and trusted weird stories that get people talking. In other words, the sort of thing often referred to by journalists as an annually repeated story – usually shortened, appropriately enough in this case, to “ARS”.