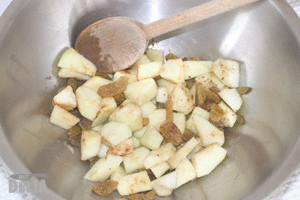 Inspired by the LoveFoodHateWaste campaign, which says that Britons throw away a third of the food they buy, I now try to do “use it or lose it” days on a fairly regular basis. This mostly involves hoiking the veg drawer out of the fridge and making something with anything that looks as though it’s time to use it or lose it.

Obviously a lot of food should be used as freshly as possible, but there’s really no need to throw something away such as an apple whose skin has gone a wee bit wrinkly.

Among other things I found lurking in the fridge, were a couple of apples and an orange which looked as though they’d seen better days. Hmm, what could I make with that?

I found a nice quick and easy recipe for apple and orange crumble in Leith’s Cookery Bible by Prue Leith and Caroline Waldegrave.

1. Peel the oranges as you would an apple, with a sharp knife, removing all the pith. Cut out the orange segments, leaving behind the membranes.

2. Peel and core the apples. Cut into chunks. Mix with the orange segments and their juice. Add the sugar and cinnamon. Tip into an ovenproof dish.

4. Sift the flour with the salt into a bowl. Rub in the butter and when the mixture resembles coarse breadcrumbs mix in the sugar. Sprinkle the mix over the apples and oranges.

5. Bake on the baking sheet for 45 minutes or until hot and slightly browned on top.

Note: If using wholemeal flour for the crumble topping, use 140g/5oz melted butter. Instead of rubbing it into the flour, mix briskly with a knife.

OK, I thought. Let’s see how I can improvise on this with two dessert apples and an orange. After carefully peeling the orange, when I started segmenting it, I discovered it was mouldy in the middle. Yuk! So that was a case of “lose it”. Tsk.

Oh well, never mind, I made an absolutely delicious apple crumble with the two apples, which were perfectly fine once they were peeled. Here’s my version.

Note: Cooking apples require sugar to sweeten them but dessert apples are already sweet so I didn’t use any sugar.

I just used half quantities of Leith’s recipe above but again omitted the sugar because I didn’t think the dish would need it. It didn’t. So, as you can see, there’s no sugar in my crumble recipe at all. If you have a particularly sweet tooth you could add some.

Peel, core and chop the apples into chunks. Place in a mixing bowl.

Add a handful of sultanas.

Add a generous pinch of cinnamon.

Mix and place in an ovenproof dish.

In a mixing bowl, add a pinch of salt to the flour and make the crumble by rubbing the butter into the flour until it resembles breadcrumbs. I did this in the food processor in the same way as I did for my shortcrust pastry recipe. 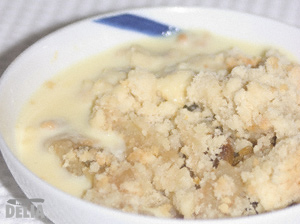 Sprinkle the crumble topping over the fruit mix and bake in a hot oven for 40 minutes or so until it looks ready – with a golden crisp topping.