As regular readers of this blog will know, I don’t follow recipes, for several reasons:

1. I’ve always looked upon it as being a housewifey thing to do. I don’t do housewifey. (I’m glad to say that I was vindicated in this on my first day at college as a trainee chef, when the instructor told me that only housewives measure.)

2. It wastes time. If I’m hungry, I want to eat. I don’t want to be faffing about measuring a half level teaspoon of this and 125 millilitres of that.

3. It ignores my tastes. If I don’t like a particular ingredient, I see no point at all in following a recipe that insists I must add it.

4. It ignores my location. I’ve lived in a lot of weird places around the world and had to adjust my cooking to suit the ingredients available. There’s no earthly use in telling me to carefully measure a commercially supplied ingredient out of a bottle if the locally available variant is prepared differently, especially if the concentration’s different.

5. Recipes can be wrong, whether it’s because there was a flaw in the recipe in the first place or because the proofreading wasn’t up to standard. Although Darina Allen’s Ballymaloe Cookery Course is excellent as a source of ideas, I find it incredibly frustrating to use sometimes because some of the quantities listed in the recipe are ludicrously wrong. (The numerous incorrect page references in the index make it even worse.)

OK, so that’s recipes. What about processed food and ready meals? Surely food manufacturers can be trusted to get the preparation instructions right for the foodstuffs they’re making and selling?

Here’s a recent example of how wrong you would be to think that.

The other day Mr Not Delia and I decided to have tacos. I did all the complex stuff – refried beans, chilli beef, guacamole and so on – leaving him with a few simple jobs such as opening a pot of soured cream, grating some cheese, and what should have been the straightforward task of heating the taco shells. He read the box, elected to use the microwave option and told me he’d need next to no notice.

When we were nearly ready to go I gave him the go-ahead to heat the tacos. Shortly afterwards I became aware of a burning smell. Here’s the results of his handiwork. 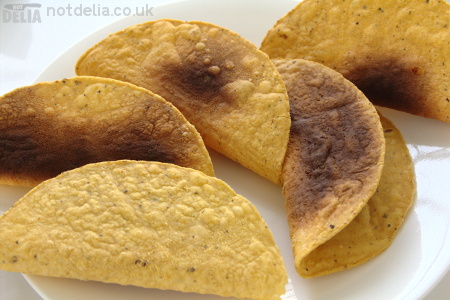 Not very appetising, I’m sure you’ll agree. (The one at the bottom left is there to show you what they should have looked like when done properly.)

Sure enough, though, he’d followed the instructions:

although in fact he pulled them out of the microwave after just a minute and 40 seconds. If he’d left them for the full two minutes we might have had a small kitchen fire on our hands. Fortunately we had another packet and were able to heat them in the oven without further mishap.

It’s not as if we have a super-powerful microwave either – just the usual 800 watts. So I wonder how many other people have spoilt their taco shells by doing what the manufacturer tells them?

Perhaps they should call them “Destructions” rather than “Instructions”. Anyway, it just confirms me in my belief that it doesn’t pay to follow recipes blindly.

One Response to “Appetite for destruction”