I got the May issue of the Australian Gourmet Traveller magazine the other day. This issue features “the best of Italy”. Yet it also features spaghetti bolognese, which is not an authentic Italian dish but about which they say:

you could argue that spag Bol has become Australia’s national dish, often polling as our favourite meal to prepare at home.

This reminded me of Simon Hopkinson’s take on the dish in The Prawn Cocktail Years, in the tratt-era chapter, where he has this to say about the old favourite:

Why this became the great student stand-by is a mystery. Carbonara… would have been (a) easier to prepare, (b) cheaper and (c) possibly less difficult to turn into a complete disaster.

Spag Bol, as it affectionately became known, was also one of these stand-by dishes churned out by bright young things who bought chicken bricks from Habitat and who were also quite taken with those tall glass storage jars in which to keep spaghetti. 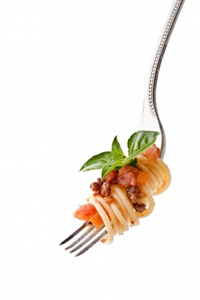 I certainly remember my student years when almost every time you went for a soirée to anyone’s house Spag Bog was invariably offered. It’s a funny kind of dish because it’s so variable according to how it’s cooked and who’s cooked it. Mr ND isn’t a great cook by any means – the poor man is hardly ever allowed in the kitchen and, when he does venture in, he’s usually treated like a Gordon Ramsay serf – but he makes a great Spag Bog. It’s even better than mine which narks me a bit especially since I taught him.

Anyway, Gourmet Traveller surveyed more than 60 top chefs for the ‘Spag Bol Poll’ to see what they put in theirs. Some of the responses are quite astonishing. I can understand that some people might prefer to use pork rather than beef and that some people might even prefer to use white wine rather than red, but I was not at all prepared for some replies which, in my opinion sound quite bizarre and not tasty at all. But don’t take my word for it. Decide for yourself.

Stefano Manfredi likes to use chicken giblets, hearts, crests and wattles when he can get them.

Perhaps the most inspiring response, though, is that of Otto chef James Kidman: “A whole 25-kilo pig, stripped of all meat, the bones put to one side so that they can be used in the cooking of the ragù.” It’s not strictly classical, he admits, “but it’s really nice”.

You can read the results of the Spag Bol Poll online here:
Gourmet Traveller: Battle of the Bol