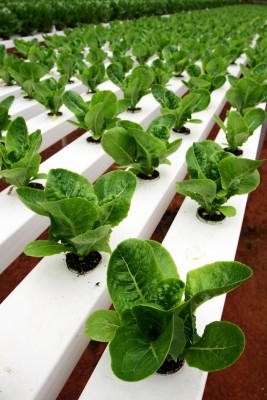 While waiting for a programme to come on the telly the other evening, Mr Not Delia and I were intrigued by a short film – no more than about three or four minutes long – about a theoretical exercise US university professor Dickson Despommier had set his students, looking into the feasibility of urban farming. (Just to make it clear, we’re talking about proper, production farming here, not the sort of museum farms that city kids are taken to so that they can see where eggs and milk really come from.)

Anyway, Prof Despommier asked his students to calculate what size of building would be needed to feed a town of 50,000 people. After initially coming up with the answer that rooftop farming wouldn’t be anywhere near productive enough, he and his students came up with the idea of putting a farm into a tower block!

It’s an intriguing prospect. Agriculture accounts for a big chunk – perhaps as much as 40% by some estimates – of the world’s fossil fuel consumption, for purposes ranging from irrigation and ploughing to the transport needed to get the crops to the processing plants and ultimately to the shops. A well designed urban farm could drastically reduce the carbon emissions from farming. A useful by-product would be all the water transpired by the plants, which could be used as drinking water – and the sewage could be re-processed using natural processes to ensure that the plants in turn had all the water they needed. And with the possibilities of a carefully controlled and monitored environment, all-year farming would be possible, increasing productivity and making the concept of seasonal produce a thing of the past, too!

But before you start planning a delicious chilled parsnip soup for the summer and a Dessert Starring Raspberries with fresh raspberries as a special Christmas treat, don’t get too excited just yet. It’s not as easy as all that.

The buildings would have to be planned with a lot of attention to detail, ensuring that each different crop grown had the conditions appropriate to it – no mean feat given the lack of natural light available in the parts of the farm furthest from the walls. Hydroponics would have to be used extensively, too – otherwise the weight of all that soil, and the cost of fertilising it (including all the fossil fuel that go into the fertiliser production process), would be a severe setback to the vertical farm’s practicality. And many of the traditional varieties of plant wouldn’t be suitable; for instance, the concept the students worked on relied on dwarf wheat varieties developed by NASA.

And even assuming the idea was feasible – and Prof Despommier compares the engineering feat involved to the building of the Saturn V rockets which took the Apollo missions to the moon – there’s still the question of whether it’s viable.

The students worked out that, to feed a city of 50,000, they’d need a design that rose 30 storeys (call it 900 metres) above the ground and spread over the ground area of a typical US city block, say 2 hectares (or 5 acres). That’s a seriously big building by any standards – it’d dwarf Wembley, for instance. Prof D himself doesn’t underestimate the cost either – he reckons the first will run into billions. And, of course, it’ll need official encouragement in the shape of planning permission (who wants to live next to a behemoth of a building like that?) and tax incentives.

To say nothing of the opportunity cost of all that land. You’d certainly be wanting to look at suitable patches of urban wasteland if you had any. Now that’s what I’d call a real brownfield development…