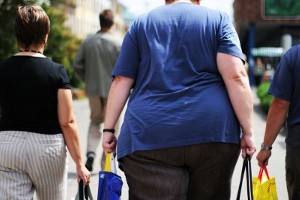 We’ve all heard the saying that inside every fat person there’s a thin person struggling to get out. It can’t have escaped your notice that a hell of a lot of those thin people appear to have given up the struggle these days. Have you ever wondered why?

For most of human existence – going back tens of thousands of years – the species has been teetering on the brink of malnutrition, and even outright starvation at times. Even the innovation of agriculture, not much more than ten thousand years ago, didn’t change matters much. Although it made the production of food more efficient and thus led to more food being produced, the surplus was almost immediately taken up by population growth. Even in 19th-century Europe, bad harvests often led to famines.

First, the invention of the internal combustion engine driven by petroleum-based products made available a cheap source of energy in a hugely versatile form. It now became possible for food producers to mechanise their operations to a far greater degree than even steam (in the form of the traction engine) had permitted – and to transport their perishable produce more quickly to market.

Then the discovery by German chemist Fritz Haber of a process by which nitrogen could be fixed from the air in the form of ammonia meant that it was now possible to produce artificial fertilisers in commercially viable quantities – thanks again, in part, to the use of petrol power to generate the high pressures and temperatures necessary for the Haber process. Suddenly it was possible to produce enough grain to feed not just humans, but livestock as well – making the rearing of animals for slaughter much less costly than ever before. With the discovery that the antibiotic tetracyclin, when fed routinely to farm animals, kept down their intestinal diseases and promoted their healthy growth, the scene was set for a meat feast on a scale previously undreamt of.

Of course, if the world’s wealth and food resources were distributed more evenly, there wouldn’t be a great deal of obesity around. As it is, meat is a good deal more expensive to produce than grain; it takes about 8kg of grain to produce 1kg of beef, and even chicken (a comparatively efficient meat in that respect) takes about 4kg or so of grain per kilogram of meat. So most of the meat that’s produced gets eaten in the developed world – and ends up in the spare tyres we see around so many people’s waists these days.

For some thoughts on obesity’s impact on society, please read this post:
Weight

One Response to “Obesity – where did it spring from?”