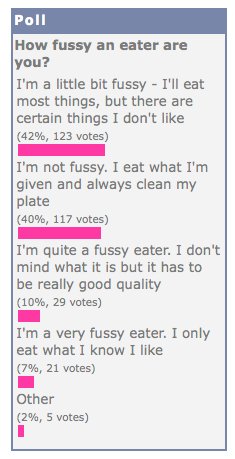 In this poll I asked you all how fussy you were when it comes to food.

A clear majority of you (59 per cent) are at least a little bit fussy. On the other hand, an overwhelming majority (82 per cent) are no more than a little fussy, and four out of ten of you will eat anything and everything that’s put in front of you.

I suppose in some ways it’s a good thing that there are varying degrees of fussiness. After all, there’s plenty of food in the shops that’s entirely fit for human consumption but just isn’t as tasty or as attractive as the higher quality produce. If we were all fussy eaters, then food would be a lot more expensive overall and the amount of waste would rise way above its already outrageously high levels.

But as someone who cares greatly about the quality of the food they eat, I do look at what I’m offered in the shop or the market before I buy it. (And if it’s packaged and I have grounds for suspecting the bits I can’t see, I’ve been known to open it in the shop after paying to make sure it really is OK – and ask for a replacement if I find it isn’t.) As for restaurant meals, it goes without saying that I send back meals which are below the quality I’d expect for the price they’re charging. Why would I want to pay for someone to cook me a sub-standard meal?

And I’m not sure at all what to make of those 40 per cent who don’t mind what they eat. Are they lucky enough to be eating only the best quality food served by the finest chefs? Or do they really not care at all what they eat? In which case, why are they reading Not Delia? (If anyone who voted for that option is still reading, I’d love to hear from you.)

If you’ve got something to say about fussy eaters, or have a particular quirk yourself, we’d love to hear about it – please comment!