We recently stayed in Siem Reap (near Angkor Wat) in Cambodia and, being the intrepid travellers we are, we stayed in an Irish pub/guesthouse there. This led somone to ask me, “Have you ever been anywhere where there isn’t an Irish pub?” Well, yes, actually. Peshawar in Pakistan’s North West Frontier Province for starters. But Irish pubs do seem to be almost everywhere. Unlike the globalisation of the fast food chains – which we very rarely frequent – we feel more positive about having these Irish havens around the world. 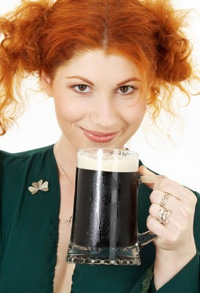 Perhaps it’s odd that such a homely institution should have become so wildly popular. After all, in many rural areas of Ireland the pub was (and sometimes still is) little more than a shop, with a bar and a few tables and chairs tacked on as an afterthought. I suppose you could try to account for it by the popularity of the beer. Over ten million glasses of Guinness are consumed daily in more than 150 countries worldwide. (That’s not as much as it sounds – if you go into a pub in Ireland and ask for a “glass”, you’ll get a half-pint. Still, it’s an impressive amount all the same.)

And it’s not likely to be the music either. Despite the popular image, there aren’t all that many Irish pubs where you’ll find the regulars are ready to pick up their oillean pipes, fiddle, bodhrán and penny whistle at the drop of a hat for an impromptu session. You’re more likely to get recorded music. And it’s the same overseas, although they’ll make a point of playing music by Irish performers – U2, the Pogues and the Dubliners if you’re lucky, Daniel O’Donnell, Ronan Keating and Pondlife if you’re not.

It could be the food, perhaps. You can find all sorts of Irish gastropubs – both in Ireland and around the world – serving a wide variety of hearty but tasty meals, often traditional Irish dishes with a modern twist. But then again that’s not exactly traditional. Originally most pubs started in the “wet trade” – serving drinks only – and the easiest way for them to branch out was into sandwiches and, perhaps, soups. Many of them stopped at sandwiches. Having said that, there’s a lot to be said for a glass of Guinness and a ham sandwich for lunch.

So perhaps it’s playing to a cultural stereotype. Your typical Irish pub has loads of old-fashioned rustic memorabilia lying around, wood and brass (preferably tarnished) rather than neon and chrome. It’s intended to be a comfortable place where the emphasis is on easy-going familiarity and quiet, good-humoured fun.

In that light I suppose it’s quite ironic that the “Irish Pub” has become the object of careful design. Take one company, the Irish Pub Company, which set up in business to design, build and help others implement Irish pubs all over the world – at the latest count, over 400 pubs in over 40 countries worldwide (including Ireland!). They’ve got five different basic styles (the “Country Cottage”, the “Victorian Dublin”, the “Traditional Pub”, the “Gaelic” and the “Brewery”), and will help the would-be publican source bric-à-brac for the walls, train staff (although they recommend that you have at least one Irish member of staff), and draw up suitably Irish menus.

All this attention to detail sounds great – and no doubt brings in a lot of revenue for Irish producers. But I can’t help feeling that these “I-can’t-believe-it’s-not-Irish” theme pubs are all a little bit Disney.

Of course, there’s one very important respect in which Irish pubs overseas are more traditional than the genuine product; since 2004 smoking has been banned in Irish pubs. Perhaps I’ll stick to the export version!